I try very hard to keep things non-personal on this blog. I don’t like giving out too many details about my privet life, that sort of thing. This is for reviews and professional opinions, not personal drama.

This year has been rediculaslly hard for me, and then again insanely wonderful. I’ve had high-highs, and rock bottom lows.

On Sunday Dec. 16th, my Papa passed away at 5pm. He was 88 years old…and the most amazing man I had ever known until very recently.

Many people if not most, are going to think my views on death are odd. I’m not conventional, not in the least. I’ve struggled with conventional religions since my early adolecense. I’m not sure why, I was raised Catholic and never really had religion “shoved down my throat” like so many do who have turned from Christian based religions. I just always had my own views of when I just knew were right. My own faith as it were…whether or not there’s a higher power, I don’t know. What I do know, is there is life after death.

I’m sure this is why I handle people passing on so well. I know I will see them again, just as I had seen them before that, and before that. I know we’ll all meet again, just like I know if I drop an apple, it will fall to the ground.

I love my Papa so much. I don’t however talk about it. Things that matter the most to me in life, I keep quiet about…but those whom I have opened up to about him, know he was a father to me. And now all of you reading this do too.

Anyone who saw us together knew we had a special bond. One that went beyond Grandfather and Granddaughter. We had the sort of bond, that connection that transcends time. I believe we had met in a passed life, or on the other side. He adored me, and I adored him. He used to tell me how special I was to him, but he never had to. I always knew.

He was my father, because my father couldn’t be. Addiction does that.

He took my cousins and I into Boston over our summer vacations. We went to amusement parks, water parks, the beach, science museums, children’s museums, play grounds, and to Salem.

Papa built a swing set in the back yard, a pool, and a tool shed, which by summer was turned into a club house for us. He built us little beds so my cousins and I didn’t have to sleep on the floor, and he ran electricity out there. We had a TV, and even hooked up the Nintendo…He and my Nana would stay up all night to check on us.

I had so many adventures with him. I love the ocean because of him…He would take me to a park, and we would walk along the walls that bordered the ocean. He’d let me climb down and explore the rocky sea side, keeping an eye out from the wall. He taught me about the jelly fish that washed up in the summer (which was my favorite time, I liked poking the dead ones with a stick…yes…I was an odd child…), and he taught me about periwinkles, and how you could use them as bait.

We went fishing once…because I wanted to. He put the worms on the hooks for me, because the weird little sea-worms freaked me out (I had no problems with normal worms.). We were there almost all day, and caught an entire bucket of little crabs, which we set free.

He took care of me one summer when I had chickenpox…even though he had never had them before, and was risking his own health.

He taught me about hermit crabs too, and even let me have a pair as pets…much to my Nana’s chagrin. He spoiled me a lot. I’m sure a lot of it came from him trying to make up for my lack of father. He did a lot to protect me from his son, and shield me from what was going on just next door. He did a great job, he really did.

Much of me is because of his influence. I learned to be emotionally strong because of him, and I couldn’t have survived the passed year with out that. He taught me grace under pressure, and how to hold your chin up and keep moving forward to take care of business first, and break down later. I’m not sure if he taught me “The World doesn’t need to see you cry”…but it’s a motto I try and hold on to. Everyone else has their own sorrow and problems, why add my own to their world? My mother sometimes calls me an Ice Princess because of this…I do feel, I just go into business mode in a crisis. I’m grateful for that, I really am.

I wish I had words to express my love for my Papa. I just don’t. I used to tell people he was my soul mate (I never believed soul mates had to be lovers.), that’s as close as I can describe the bond he and I had…still have. Because it never goes away. He was kind, gentle, and so giving of himself, and he loved me so much. So very much, and I love him too, and always will.

I take comfort in the knowledge that he is with my Nana again. He missed her so much. She died of lung cancer about 15 years ago, almost 16 now. I take comfort knowing he was ready to leave this life, and be reunited with her. He was tired, and ready. I sent my cousin to the hospital with a message for him from me…telling him that I was going to be fine, and that I love him.

I had a dream a few days ago…

We were walking in Boston (which looked a lot like Tokyo), and I had gone into a shop to look at something, and came out. He said to me “I’m tired.” and I asked him “Do you want to go back? We can go home.” and he said “You stay here, and I’ll go back. I know you’ll be alright.” I woke up, and I knew he was going to die soon… I believe the subconscious can reach out to those you love…I knew he was sending me a message, and I wanted him to know I received it.

I will never take for granted what he taught me in this life. And I will pass on the lessons to my children some day, and then to my grandchildren. His love for me and his family will live on and on…He deserves to be immortalized like that, and he deserves to be spoken about to the World…The World deserves to know him, and what a good person he was. By writing these words, in this little blog, I hope I have honored him as best I can for now.

I love you Papa. So very much. 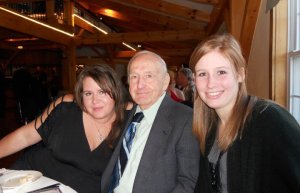